So as an NTSC user of the QL I get the joys of using only 192 of the 256 lines when using composite out -- well, color composite since my LCD seems to handle monochrome composite in its full PAL glory. Back in the late 80's and early 90's when all I had was a TV to plug my QL into I don't even know if the monochrome composite would have worked (I didn't realize it existed, otherwise I would have tried it).

So there are many programs that are not fully usable because the bottom gets cut off. Now if I run it in monitor mode and have an RGB to SCART cable and up-convert it to HDMI, all should be good, except maybe loosing some pixels on the left (QL-VGA will fix that).

In any case, I've played around with the SCALE keyword but it doesn't quite work for everything, only graphics, so if you mix modes, I don't think you can magically just re-scale things and have it fit...plus you lose width in that case too I think. So I wanted to run the QBQLSounds program on my LCD tv in color and if I run it as is, things get cut off. So I did some mods to it (as minimal in the actual code as possible since I didn't want to spend weeks learning how it works) and turned it from this: 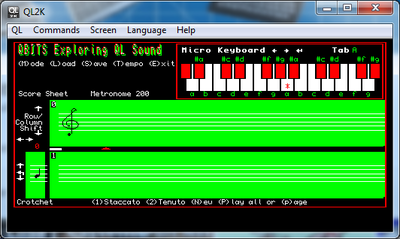 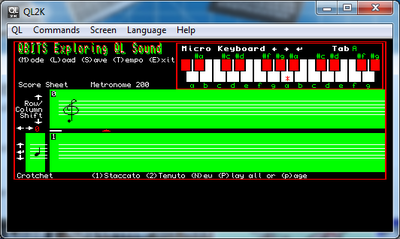 I remapped the following calls, renaming the originals by appending a D and anyplace that the TO keyword was used I just did multiple calls since I don't know if DEFine can handle these type of variable parameters in SuperBASIC (i.e. LINE a,b TO c,d TO e,f became LINE a,b to c,d: LINE c,d TO e,f which could then be replaced by DLINE a,b,c,d: DLINE c,d,e,f). Note that with a JSU ROM, the characters are only 8 pixels in height (compared to 10 in JS) so that works out with text (and why the PSION suite worked similarly on NTSC machines since they re-worked their software to fit on the screen -- pretty smart by them but it's only the 4 apps as even QL Chess doesn't do that).

Here are all the newly defined procedures:

It would have been a nice feature where you could have specified a re-mapping of screen geometry. Maybe a command like MAP 512,256,0,0 TO 512,192,0,0 that would have done that. But that likely would have added a lot of overhead to the ROM. Not sure if non SuperBASIC would have worked with that. But still, having grown up with the NTSC shortcoming it would have been nice (though I realize the market for that is so tiny).

The LOOKUP% and BPOKE_L keywords are part of the DIY Toolkit (part-B), BASIC_B% is from the Turbo Toolkit.
The S*Basic DLINE Procedure should be renamed as it's already claimed by QDOS and will delete S*Basic lines, not really what you want.

Without creating a separate library, I'm actually going to give a try to compile the entire BASIC program in order to create a single executable. Which BASIC compiler would make this the most seamless and give me that single executable with no need to LRESPR anything else?

You can't go wrong with QLiberator, that's the compiler I would recommend.
I am using QPC2, and found that "del" is a keyword, so I changed that variable to "delay".
Also, to get it to work, I found that CURSOR #ch, x, y had to be changed to AT #ch, y DIV 10, x DIV 6.
The version I'm using is QPC2 v4.5. It could be that the latest v5.0 perhaps cures that problem.
Using QLiberator, this compiled straight off, with no problems, and it works well.
The cursor can be moved around the screen, and the sounds experienced.
Seems like a nice program.

bwinkel67 wrote:Without creating a separate library, I'm actually going to give a try to compile the entire BASIC program in order to create a single executable. Which BASIC compiler would make this the most seamless and give me that single executable with no need to LRESPR anything else?

Both Turbo and Q-Liberator would be able to compile and create a self-contained program. The choice depends on your target platform and why you are actually compiling.

If your compiling with the target of having one self-cotained unit that is simple to distribute and load, bith Q-Liberator and Turbo are fine.

If you're compiling for speed and your target is SMSQ/E, don't try and use QLib - The finished binary is likely to be not faster, maybe even slower than the same program un-compiled in SBASIC. When compiling for QDOS, you can expect a significant performance gain even with QLib (simply because SuperBASIC is so much slower than SBASIC). Turbo will improve your program's performance on any platform, obviously much less on SMSQ/E.

Apart from that, the choice is simply a matter of taste and what you find easier. Most of the early Turbo deficencies have been lifted long ago, and, with very few exceptions the two compilers can basically compile the same set of program constructs.

... Meaning there are still some issues still lurking in Turbo's code.
Would you like to document some of the remaining ones?
Of course, whenever we come across something that doesn't work right, we'll try to find a way around it.
And then, the issue gets forgotten about.

DEFine FuNction Max (a, b)
IF a > b : RETurn a
RETurn b
END DEFine Max

in S*BASIC and call it with a pair of strings, or integers, or floating points - QLib will happily compile and run it, Turbo won't (or, rather, will only if you call it exclusively with FP variables. If you want to do the same thing with strings, you need to write a Max$(a$, b$), and when you need to compare integers, it must be a Max%(a%, b%) or Turbo wil happily present you a runtime error).

As explained in the Turbo manual, the main concern is with the speed of its code and needs to generate fixed type parameters. So, with the design already built-in, this is hardly likely to be fixed.

What I was more concerned about is actual bugs in Turbo's code. For example, consider this 3 line program ...

MANIFEST : TMAX = 23
:
REFERENCE                  array(0)
DEFine PROCedure something(array)
LOCal path$( (1+array(1)) * TMAX )
END DEFine
The above does not compile, and I cannot see any way around this. Locals have to follow procedure definitions, that's the rule. And there is no way of assigning the value of the array(1) anywhere. All I can do is to DIMension the string at some colossal length to make sure it won't fail in the future.
This is what I call a bug, Turbo is failing to evaluate what's in the brackets. According to the manual, Turbo can handle up to 20 brackets before it gets into difficulties. The error message that Turbo gives is about TMAX, but that is incorrect. I believe I did get around this bug by rearranging the order of terms between the brackets. To conclude, I would say there are bugs in all programs, and Turbo is no execption.

Hmm. Your last example compiles nicely on my Turbo 5.02. It complains when I remove the REFERENCE to array (which it shouldn't), but otherwise compiles.