I'm the proud owner of a sprinkling of ZX81s, Jupiter Aces (clones), Spectrums, BBC Bs, BBC Masters, C64s , Atari STEs and Amigas. Until now I've never owned a QL. I got one last week and it's currently in bits awaiting the arrival of some electrolytics. Prior to dismantling it booted up to the copyright message so it's alive but, unsurprisingly, it does need a new membrane. It'll soon be joined by another QL, an 'untested' doer-upper that's in the post.

Without the Sinclair computers I doubt that I'd have entered into a very enjoyable programming career. They also helped to keep my finances in the black through university, having had assemblers and various other software published for the ZX81 and Spectrum.

I've never heard a microdrive roar so I'm looking forward to the experience. It won't be long before I get some expansions and I may, as an introductory exercise, port some of my STE software.

A very warm welcome to the forum. I think more roaring is done at the microdrives!

What will you be porting over (hopefully)?

Welcome to the forums and I am glad to have been able to help provide you with one or two things you needed so far. Certainly the QL has shaped what I do today - from C programming and even PHP programming, to project development

Thanks to you both for the welcome. I had two apps in mind, both of which I first did in the 80s. The first is a version of Forth in assembler, called FIF (Fif Isn't Figforth - and for another obvious reason). It's integer only (at the moment) and the vocabulary is based loosely around that in the BBC micro implementation. It even does the graphic on the front cover of the accompanying book and has the same line editor based screens. I re-did FIF last year.

The second was a 3D protein model viewer. It did real time 3D rotation of stick models of proteins, like the one here (done by a more modern program): 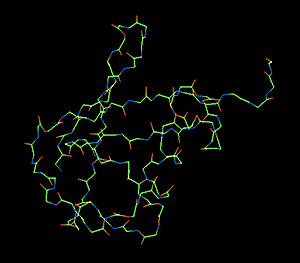 That's a protein called ubiquitin.
It relied on a pair of LCD spectacles. I'd have to investigate how to make a pair of those these days. I seem to remember that I could rotate a haemoglobin alpha chain (approx. 2000 atoms) pretty smoothly, but perhaps I'm now looking through rose-tinted spectacles instead and it was just the 140-ish alpha carbon backbone atoms. It'd certainly do something like ubiquitin, as above, quite comfortably. The atomic coordinates were read and processed by a C program and I implemented the graphics/rotation code in assembler. If I were to redo that then it may well require a Miracle card clone. Well, you did ask.

Thanks for the bits Rich. Much appreciated as ever. You may well be getting another order in a few days after I see what the doer-upper needs.

New software is always welcome, there are some implementations of Forth with the source code which might help.

The 3D protein model viewer, sounds interesting, there was a Molecular Graphics programme on the QL, but is located in the Quanta Library, which is only available to members of Quanta.

Welcome AJB from West Yorkshire. Now, I'm not suspicious, but ...

My wife is from West Yorkshire, Bradford to be exact.
Her initials are (were) AJB - hmmm.

She never mentioned that she coded in Forth etc, I shall be having words!

Why do they put lightning conductors on churches?
If at first you don't succeed, don't take up skydiving!
If you think your job is pointless, remember, there's someone in Germany who fits indicators to BMWs.
Top

Now you are using Scottish words, like I do when I'm back home in Elgin. I detect an exiled Scot or a Terry Pratchett fan - I think.

Why do they put lightning conductors on churches?
If at first you don't succeed, don't take up skydiving!
If you think your job is pointless, remember, there's someone in Germany who fits indicators to BMWs.
Top

You've got me bang to rights on the Pratchett front and you've just helped me to decide on my avatar - a porcelain figure of "DEATH riding Binky" that sits on my mantelpiece. The perfect memento mori.

PS: Thanks to Derek for the application info.

Return to “The Welcome Area”