The Pawn is back. And it's not alone!

The choice of graphics mode to use for the game wasn't easy at all. I wanted to conserve the charme and "look and feel" of the original as much as possible while pulling off most of what the Q68 can do.

The Pawn graphics originals are max. 320x200, originally targetted (and created on) the Atari ST. They were reportedly created using NeoChrome on the ST and use, as already mentioned only 16 colours from a pallette of 256.

First, I tried creating a PE interface for the game - A Window (in DISP_MODE 3 or 7) that held the main text and received user input, and a secondary window that popped up on top of the text when the location you were in had a picture attached. That didn't really sort out and was simply annoying. So, dump it.

I then even put the picture display window in a separate job to be able to detach it from the main job's window (the two jobs using the picture buffer to communicate), but that also simply didn't feel right and was still annoying. So - dump that again.

BTW: The slowdown in these high-res modes isn't really a problem for an adventure game.

Then - again targetting high-res modes - I went for inline graphics (mixed with the text as it is now). That felt much better, however the pictures looked more like thumbnails than the impressive pictures I remembered - 320x200 is way to small to display in an appealing way on such a large screen.
That meant I had to try upscaling and dithering the pictures to 16-bit hi-res and 640x400 (interpolating the 16 colours to 65000). That worked nicely, however, the pictures were starting to look mushy and blurry (if interpolated) or really pixelated (when up-scaled only). Also, the dithering took its toll on the poor CPU - displaying a picture took nearly a second which was not really a problem, but slightly annoying. Didn't feel right as well and had about as much character as a Windows 10 GUI.... Dump that again.

I then decided to go the minimalistic way: change to DISP_MODE 6, my favourite mode on the Q68 and a full-screen application (it is still PE-aware and obediently multi-tasks) - Here, the pictures had about the right size without any scaling and could be presented in their original glory (still only 16 colours) - However, there simply isn't enough screen real estate in this mode to display the large amount of text for the game - I had to reduce font sizes, accepting to make them a bit harder to read, but I was able to manage the amount of text without extensive scrolling. (Maybe I did overdo it a bit using a 4x10 font when a 5x10 would probably still have been sufficiently small, but I'm awaiting your feedback on that) In the end, I really think it's pleasing now as it is and looks very 1985-ish. 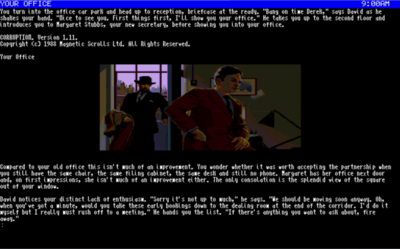 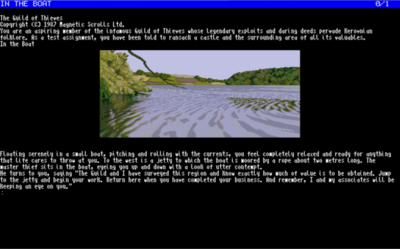 Oh wow, you legend! I had both of these on the Acorn. Does the music play on the title scene?

Or am I just being greedy now?

No, it doesn't. No music, no hint system.

Or am I just being greedy now?

Background is: The music in the later games is MIDI based - easy to play on an AdLib card, but pretty hard to do on a raw DAC system.

What about recording it from my old youtube video?

Here's the game zip file and its README (Please read before downloading):

Disclaimer: This software package does not contain any IPR from third parties.
To use it properly, you will, however, need to download the original game files
ripped from the original Magnetic Scrolls games. These are hosted by the Magnetic
Scrolls Memorials site, which claims the following:

"Important note:
The rights on the games are held by Magnetic Scrolls Ltd, which belongs to Anita Sinclair
and Ken Gordon. Their games, sadly enough, have been unavailable for years, so there are
very few options left to play the games in a legitimate way.
The reason for making the interpreter files and the game related materials available here
is to prevent the loss of the games. Anita and Ken - very nice people indeed - both know
the Memorial pages and didn't object to the contents, so I assume that the page is in
their spirit and the availabilty of the materials on these pages is tolerated.
Of course this is not a legal entitlement and obviously the materials can only be used
for personal, strictly non-commercial purposes."

If you decide you can live with this, I'd recommend you download the game files from
there and do not further distribute them.

If not, you should probably stop reading and delete the software.

The software you'll find in this zip file is based on work by Niclas Karlsson, who
decoded the format of the Magnetic Scrolls games and implemented a game interpreter
for those games. The MS games are actually written in a sub-set of 68000 assembly,
which is executed (emulated!) by this software.

The Software
------------
The software that comes with this package is an interpreter for ".mag" game files,
optionally coming with picture files (".gfx"). The interpreter will run the games (all
seven of them) as they were back in 1985, displaying the original graphics in locations
that have them.
The hint system and music support that were in some of the later MS games is not
supported. Furthermore, the graphic animations in later games (for example the cut scene
when falling down the rabbit hole in "Wonderland") is not supported. The animations will
be shown as static pictures. I hope and assume this doesn't take too much away from the
original experience.

The software plays all 7 MS games
- The Pawn
- Jinxter
- Fish
- Wonderland
- The Guild of Thieves
- Corruption
- Myth
with all the graphics files.


Prerequisites
-------------
Currently, you need a Q68 to run the games - The interpreter is not working on any
other QL platform at the moment, versions for these are in preparation.

You will need this software unpacked on the q68 - use "unzip" on the q68 itself, the
software will unpack to a directory "magq68" per default. You'll find a file
"magnetic_exe" in that directory, which is the game interpreter.

You will, in addition, need all the game and graphic files for the MS games you want
to play. Due to copyright reasons, these files are not included in the package, but
openly downloadable from

with the above disclaimer. (Scroll down to the bottom of the page. You can disregard the
"collection" files - you are interested in the top 7)

Download the single game zipfiles, unzip them (as they contain no executables, you can
do this on the PC). For each game, you should have a ".MAG" and a ".GFX" file - The
former is the game itself, the latter the graphics file. Place all these files in the
same directory on you Q68 image as the software. You can disregard other files in the
downloaded archives - The Q68 version doesn't use them.

Running a game
--------------
The software takes the game you want to play and its associated graphics file as command
line arguments - So if you want to play "FISH", for example, use the following
command line (above directories assumed):

Users browsing this forum: No registered users and 5 guests