hello has enybody the superbomber from talent ......on real ql
also i got the packman(mcrunce) but it freeze (space bar not respond)on real ql
many thanks

Where did you get M-Crunch from and what ROM version is in your QL?

i try it on jm and minerva 1.98 an yes is from dilwyn page

I attach the preserved copies of the Medic Datasystems programs so that you can test them.

Unzip using Windows and then you can attach the folders to q-emulator to copy to floppy disk.

If working then they can be uploaded to Dilwyn's site (in case they need to replace any of the other versions on there).

RWAP wrote:I attach the preserved copies of the Medic Datasystems programs so that you can test them.

Unzip using Windows and then you can attach the folders to q-emulator to copy to floppy disk.

If working then they can be uploaded to Dilwyn's site (in case they need to replace any of the other versions on there).

M-Crunch seems to be on my games page as a "Pacman" with a request dating back to 2002 to ask if anyone recognises the Pacman as M-Crunch, with no reply ever received.

The BOOT file is very different, but the code file seems to be similar (not done a byte-for-byte comparison yet to check if one might be a patched copy of the other for example).

Once we know if it works or not, I can replace and update the copy on my site.

Not having a QL set up here ATM, and knowing it doesn't work on QPC2, I'm not able to test for myself.

Did a byte-for-byte comparison of the code files for the two programs. Same code length, but a long word at offset 6884 (decimal) or $1AE4 is different. Unable to determine if this is a corruption or a patch without disassembling, but a 4-byte patch seems unlikely.

Probably if you can get this version to work, it'll be a corruption and I'll replace the version on my site.

A word of warning: the length of filename of the gif screenshot in Rich's file makes it difficult to unzip in a directory on a QDOSMS system due to path and filename lengths. However, as the code file is not executable, you should be able to unzip in Windows, or even delete the gif before moving to QL. Also, there is a hyphen in the filename which zip may interpret as a command line switch unless you use the option of quoted filenames, for example. 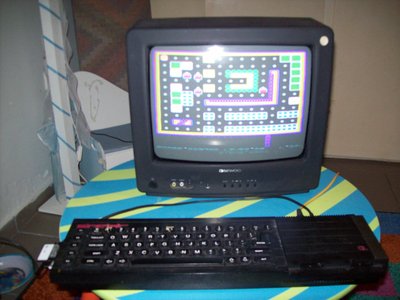 nikosdoykas wrote:hello i got a qubata(qubide) so.......... i can unzip on a real ql and the both files so i can try the comparization to areal ql? and the medic? so i see that the medic has 4 files........ i presume that can be run from win1_medic xmm ... i will mece the unzip to a real ql and i will feed back for ALL
now about the super bomber?????

Well done for getting most of the programs to work on win1_!

It is always difficult with these programs which were written before the days of WIN and directories on the QL.

If the code contains no reference to drive names, there is a good chance you can edit the BOOT program to change MDV1_ to WIN1_MEDIC_ (or whatever). For example, in M-Crunch boot line 49 there is a reference to MDV1_ in the LBYTES statement. This type of change is easy for someone with experience of editing BASIC programs. But as the boot program contains some POKEs it is very unlikely that the game would run on anything other than an original BBQL, for example not on a Minerva system with secnd screen active.

It's always more difficult when a machine code program from the old days refers to a drive name to load pictures, fonts or high score tables or configuration information. It's hard to alter the code to make room for a longer drive and directory name, so then you have to resort to substitution tricks such as using the DEV or SUB devices on systems which supply those so that you can fool the system into temporarily thinking that MDV1_ is really WIn1_medic_, for example. Reading manuals or articles about DEV or SUB may help. A rule of thumb is that you define which drive and directory the DEV or SUB device refers to, then alter its name to the device being substituted. For example, with DEV device:

What happens after those three commands is that the system thinks that when you type MDV1_ that you really mean win1_medic_ so that DIR MDV1_ for example gives you a list of files on win1_medic_ - commands like LOAD, SAVE, LBYTES will all be "fooled" in this way. It is a kind of last ditch way of forcing older software to work from directories. The example given makes MDV1_ and MDV2_ refer to the same directory, but can be different if you wish by giving different names after DEV_USE 1 and DEV_USE 2.

The DEV device was built into the ROMs of some Miracle Systems interfaces and may well be in the Tetroid clones too (not sure, I don't have one, maybe Vitaly will confirm?).

For systems which don't have DEV, there is a dev_rext you can download from somewhere on my website, I think it might be on the Toolkits page http://www.dilwyn.me.uk/tk/index.html. It's not as comprehensive as the Miracle version, but suffices in most cases.

An article about DEV is available on my site at http://www.dilwyn.me.uk/docs/articles/index.html

i make soft to work on win1_ inside folders change(boot) the file path of loading or exec so most programms run inside folders some dont
like wiz /int cricket /bullseye because have multiload code that make halt because file not found (can find the next file inside the exec or code) no problem can run like win1_not in folder but uot side if you wrote 5 win_use flp so when you make the l run the boot automaticly change ... and loads like flp.... olso i load tk2 like a soft or turbotk djtk on folders....
I SEE 3 MDV OF A TALLENT..... BRAND I WILL REFELT AND SEARCH.......
SO WHAT ABOUT SUPERBOMBER????