1024MAK wrote:I hope y'all are not including the large numbers of helpful friendly Stardotters in this 'prickly' category

stardot is the jewel in the Acorn crown, awesome community there

My expereinces were more in person with Acorn User Groups around Edin and Cambs!

by vanpeebles
No I was speaking more historically of the 32-bit scene. Stardot and the 8 bit Acorners are a good bunch

by 1024MAK
Thanks for the clarification everyone

by Dave
As a Risc PC 700 owner (it is faulty, and I miss it so, so much) I have been out of that community since the 90s, but used to write for Archive. My preferred PCB design platform is ArcPCB.

tcat wrote:I am sharing back my work as you helped me with it.
It is not perfect, yet functional on my QL.

Great work! Is it possible to get the cad-files? In the german Sinclair forums we want to make a small batch of professional produced pcbs (approx. 10 pcbs) and it would be great to have the (eagle?) files.

by bwinkel67
I'm planning on giving tcat's board a try by etching my own PCB board and then populating it and getting the GAL properly configured. Seems like there was a brief discussion on an improvement on it with regard to interference but no new info that I found. I downloaded all of tcat's files (PDF's, eqn, and jef) and from that it seems pretty straightforward.

Hi Phill,
I saw a same of your work and I want to get one

Is there any option to get a PCB or the whole module?

by Chr$
Digging up this thread again because I had some internal RAM PCB's made based on the design/discussion here but using SMD RAM chip and GAL, so that it can be fitted without having to change the CPU socket and without rubbing up against the ZX8301. A mistake was made on the PCB and one of the GAL pins wasn't connected to anything instead of going to the CPU, so the black wire is a bodge to make it work (and it does work). 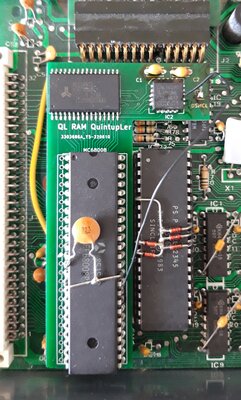 Before I get changes made I had the idea of adding a switch to the side with access to it through the expansion port (with a long poky thing!) so that if the QL is to be used with external RAM, the internal module can be turned off and there would be no need to open it up/remove it from the fragile CPU socket.

So my question(s) to the members here who understand more about these things than I do: It is possible and to disable such a board and would it just be a case of adding a switch to break the connection between the 5v that comes from pin 13 of the CPU, before it gets to the RAM and GAL ICs? Or would one also need to break the connection between GND and the RAM and GAL?

And if anyone wants one of these boards (with the missing GAL connection that needs to be bodged) for just the cost of postage, let me know.

As for a 'disable' feature, I have done this before (for a very different RAM Expansion design) by allocating a pin on the GAL for the purpose and adjusting the decoding logic to take account of the state of this input.

Happy to share my (far inferior) design via PM, should that be of any use...

As for a 'disable' feature, I have done this before (for a very different RAM Expansion design) by allocating a pin on the GAL for the purpose and adjusting the decoding logic to take account of the state of this input.

Happy to share my (far inferior) design via PM, should that be of any use...

That sounds interesting Martyn, but I'm not sure I'd be clever enough to implement it! And I certainly have no idea how to write logic for GALs. Very happy to take a look though.
All times are UTC+01:00
Page 9 of 10
Powered by phpBB® Forum Software © phpBB Limited
https://www.phpbb.com/