Dave wrote:Someone elsewhere commented that it was nice I might get some competition.

I have mixed feelings about this.

On the one hand, I instinctively feel a little unnerved by the idea that my main fundraising project to develop UltraQ could be challenged but on the other, I don't.

This is a 512K expansion. If anyone makes them in small numbers, the cost will be around £40-45 each, retail. I'll be selling my 896K expansions for £15 more, which would release a lot of 80s 512K expansions onto the market for a lot less. I would sell a few less SuperRAMs, but that's ok. That's more SuperRAMs available to sell with UltimIDE. I also have an advantage of time to market. SuperRAM is now only 3-4 weeks away from shipping.

As far as my internal 512K goes I'll only be producing them for my own use (I currently have 7 QLs, 1xTrump card, 1xExpanderam and 1xSuperQboard 512). So no competition intended from here

I encourage any effort to put new hardware out there. There's many new designs I'd like to license or get permission to use for QL2 - a good example being any new compact design that allows a new mouse port and PS2 keyboard. The more there is, the more incentive returning QLers have to actually return, instead of just visiting web pages.

I just sent the QIMI PS/2 boards away for a prototype run today hope to have them in a couple of weeks.

A PS/2 keyboard would require one of two things, either a circuit that emulated the IPC and added PS/2 capability, doing this would be possible but may introduce compatibility problems with things like Hermes / SuperHermes.

The other way of doing this is a circuit that emulates the QL keyboard matrix. I have implemented the second option for other machines (Dragon 32, Acorn Atom, BBC) using an AVR micro controller and a Zarlink MT8816 cross-point switch IC. With the QL we may be able to get away with a simpler circuit without the cross-point as the IPC handles the hardware interfacing to the matrix in a way that it can't be altered by the application programmer deciding for instance that they'll only read one line of the matrix (games often do things like this for speed) So once the keyboard was working it would stay working.

Of course if the Hermes / Super Hermes design where available we could use that as a basis, hopefully without breaking it

tcat's expansion is ideal for that - it's all through hole... My expansion is designed to be very low profile so it is fully SMD - most people would not be able to assemble it.

I will not be offering fully populated boards for sale, but I will try to support any hobbyist like myself in building their own board just for their own use. I can produce a small amount of PCBs, for anybody needing a one, I have the negative done, and I need just a week's or so turnaround to get Cu board and drilling done for me. But please bear in mind, it is not perfect as it is just DIY quality.

I built one of these from the supplied PDFs and I have a couple of recommendations:

1. The heatsink area needs to be increased for that regulator. Alternatively, the entire device can be run by a 100mA 78L05.

2. A couple of the tracks are picking up some noise - enough that in some systems it could be a problem. This can be resolved by filling all unused space with a groundplane, which can also resolve point 1.

The worst affected track was the one going from signal A14 to pin 3 of the RAM. That was the only signal where the noise was enough to be close to the threshold of causing corruption in my clean test system. On some backplane systems or noisier QLs, it could cause crashes. 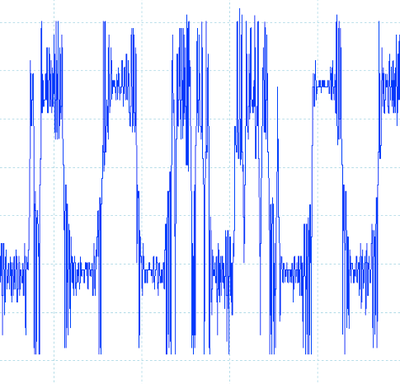 Remember, this being a single RAM device, you can connect any A.. or D.. signal to any A.. or D.. pin on the memory device, which can prevent a lot of long routes, thru-holes and etc.

For clarity, the above trace is noise picked up with a Miracle hard drive plugged into the ROM port. That seems to be the worst case scenario.

Thank you for your feedback, as I said it is not perfect, I have only a multitmeter, and a plain (pistol type) soldering iron, no osciloscope, and having no sound knowledge in micro electronics this is possibly best as most hobbyist can do.

I have just 128K unexpanded QL, only microdrives, no floppies or HD, recently plugged with TK2 external cartridge, and wanted more RAM to experiment with the pointer environement that requires more memory.

I have also no means to test along with other QL common h/w expansions, here I rely on the QL community, if they wanted to contribute back to the project, also it was meant to be solely the only expansion, as simple as possible no through connector.

My interest here is non commercial, if you can help to improve design further, while it stays DIY accessible to anybody that is fine I believe for all parties. Hobbyist may then either try to build their own DIY board or buy a proffesional product.

I think a second version of the board with just slight changes would completely solve the problem - which won't even be a problem for most people. I have PM'd with suggestions.

And just to keep people updated...

Hi Phill, your expansion is very very nice and also perfect to put into bbql so ...is your intention to share pcb layout in this forum ? I've seen in spanish forum similar but rudimental kind of expansion but yours is better