by bwinkel67
Before I wander off to a ZX Spectrum forum (unfortunately I haven't done any posting on one) I thought I'd ask for help here. I have a broken issue 2 board one and have been trying to fix it. So far I've confirmed:


If not the ULA and ROM, there isn't much left. Just the a chip for the TV modulator and two chips that seem to control the upper memory. Could it be the CPU? I have a spare ZX81 with socketed Z80 which I could use (just have to unsolder the ZX Spectrum's Z80 which won't be that bad. Any ideas would be helpful...

by Pr0f
From my experience with the harlequin board - this pattern is usually down to data bit or address bit not working. Out of interest - what patterns do you see when you reset the computer? If you don't have a reset switch wired up - you may want to rig one up quickly - as repeatedly plugging and unplugging the power is not a good idea.

by Cristian
Some thoughts:
- I have 3 original ZX PSUs, and no one outputs less than 9V (their voltages vary from 10,5 to 12V when disconnected, and at least 9V when connected to Spectrum).
- till now I haven't found yet a 7805 regulator which provides less than 5V (both in QLs and ZXs). But probably I'm lucky, I have only 3 QLs and 3 ZXs to test so my experience is limited.
- the defective PSUs may provide a low amperage when giving a correct voltage.

I'm not saying that the problem comes from PSU/regulator, anyway I think a deeper check doesn't hurt.

by Chr$
The ULAs can be quite fragile. Rare for the logic for the upper memory to die (it has happened to me, but probably shouldn't manifest itself like that). The Z80s are pretty good, but I've had those go too! I think my first swap would be the ULA. Dead/dying ones can do some crazy stuff, and they are generally always socketed. I assume you don't have a spare though.

by Pr0f
The display pattern suggests the ULA is working well enough to provide video signals with correct sync, and the coloured squares show the attributes memory has some random data in it. Since this is the 48K model - the video is coming out of the lower 16K contended RAM. Are any of the major chips socketed ?

1) Master 14MHz clock is running - as video is working
2) ULA is working enough to read some data from RAM and produce a display - the black and white bars suggests some organisation to RAM, but may indicate a faulty address line

Is CPU getting clocked at 3.5MHz?
Is CPU executing the code from ROM - no sign of any copyright message so that suggests what ever the fault is, it is affecting the Z80/ROM as well.
Does pressing keyboard keys affect the display at all?

by bwinkel67
Thank you for all the feedback. I'll try and answer all the questions:


So it seems two of the potential remaining issues are either a bad ROM or faulty CPU. I have a spare CPU so my next step is to unsolder the CPU, add a socket, and try my ZX81 Z80 (which is socketed). If that doesn't work then find a ROM and if still nothing then I'll have to replace the ULA (that is the most pricey part I think...I believe Charlie makes a replacement one). I may invest in an EPROM programmer which means I can just buy a blank and try to burn a new ROM (and maybe test the old one).

by bwinkel67
Some progress. I replaced the Z80 and now I get this. So this seems to be part of the startup sequence where the ROM is checking how much RAM you have (not checking if the RAM is ok) but then doesn't continue to clear the screen and put up the "(c) 1982 Sinclair Research, Ltd" and cursor. It does have some distortion (like maybe that's the splash text trying to print to screen). Does this suggest the ROM is good as well? If so then the only thing left is a couple of logic chips. 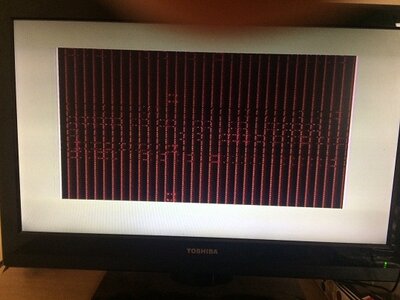 by Pr0f
That's very similar to the 'blackout screen' you get just before the prompt comes up. Suggests that it's having an issue somewhere, as you are not seeing a fully black screen.

Pr0f wrote:That's very similar to the 'blackout screen' you get just before the prompt comes up. Suggests that it's having an issue somewhere, as you are not seeing a fully black screen.

Does this suggest that the ROM is working? I did test the RAM so that is good. The ULA seems to be OK.

by Pr0f
If it's processing through the ROM then yes. What you really want is a plug in cartridge or similar that has it's own ROM in it - see if that gives a legible display. There is a good diagnostic ROM for the spectrum (well actually several), that will attempt to test cpu, memory, screen etc. This will diagnose any issues with the hardware.

It looks like it may be one data line that's not working correctly - either shorted on or off, and that will affect the computer running once it goes beyond the code that's in the ROM. The resistors will prevent this causing issue for the z80 when it's running out of ROM, and the ULA will happily show what's in memory - regardless of if the memory is all working correctly. Each RAM chip is using one of the Data lines - so it may well only be one of these that's not working or is being held open or closed circuit or shorted.
All times are UTC+01:00
Page 1 of 2
Powered by phpBB® Forum Software © phpBB Limited
https://www.phpbb.com/