I didn't want a membrane keyboard replacement for my QL since it would go the same way as the original so I took a look and thought I could put a switch based one in the same place. I see now there is a professional version with special switches being done over there
viewtopic.php?f=2&t=3395
My route was more simple and requires no mods I think to just replace the metal plate with a PCB. However I am an electronics engineer and we are known for always getting the size of the box wrong. I measured things up and think a pcb with surface mount switches as pictured would fit. It looked like a simple task with comparable cost to a new membrane so it seemed a no brainer. Then the woes started and have been running over the last three weeks. My old PCB software decided not to work any more after I had spent time positioning the mounting so I thought rather than fix the software I would kill two birds with one stone and learn how to use gEDA because it looked like you could import a Gerber layout easily and I use Linux these days. It turns out gEDA is full of bugs on Linux and I am now stuck in the middle I have made the foot print of the switch, placed them but can't get a netlist in to PCB to route it. Part of the reason for trying gEDA is it has autorouting and facilities that I thought would be ideal for the simple keyboard layout. I have spent too much time messing around with it now so I think I will go back to my old software. I ended up manually editing the netlist and the PCB file that are all text files to make all the components line up but still the PCB doesn't want to connect the parts with the netlist. All the instructions for PCB say you might need to go to the command line that has more options that doesn't exactly make gEDA a suite it is more a collection of unintegrated programs on Linux.

At least I stopped myself from throwing the computer or myself out the window from frutstration. The switches were 100 for £5 and click although there are silent ones of the same size that might prove better if the rubber under the keys folds before clicking the switch but I won't know until I try it. If the PCB ends up being £10 the total cost would be £15 plus labour so a bargain for me for a keyboard that doesn't rot. 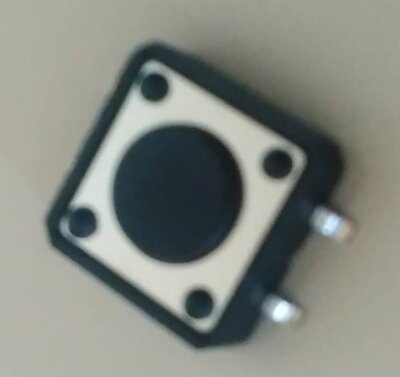 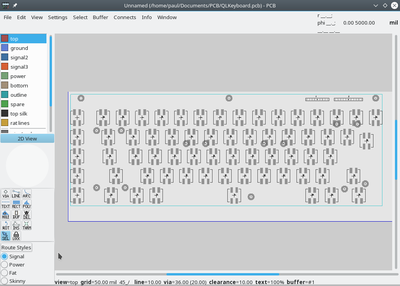 Have you tried Kicad? I use it on Linux although I don't use the autorouting feature, it does have one. I think it also has that autorouting thing for making sure that certain traces are the same length etc. (Differential routing I think?)

I use it purely as a non-skilled hobbiest! However, CERN do the maintenance and also use it themselves, so it can't be all bad?

I must have had a brain fade when looking for Linux PCB layout software.

I searched the software installer and never saw Kicad but now you pointed me to it the site has a stable version for my Linux and it is in the install software. It looks much better than the crappy PCB software so I will have a look the trouble is it means I will have to draw and layout the whole thing again. I have seen gEDA mention Kicad for imports along with other systems but dare I try and import my schematic and PCB from gEDA and waste another three weeks? Probably not. Thanks for pointing kicad out to me I have installed it while writing this and shall have a play now.

I use both gEDA and KiCad, if you need to import Gerber files into a PCB layout programme, I use Gerbvies in the KiCad 5 package. This allows the Gerber Files in RS-274X format to be imported into a Gerber project, than szved to a KiCad PCB project file. KiCad PCBNEW can load the PCB project.

Note there are no componets, track sizes, netlist, so this will have written by hand and imported, this may fail and quite difficult. But can be done.

Altium Drsigner has a docrument file outlining thr ptocedure to do this in Altium, which I did grt to work in Altium 17. So KiCad should do it.

If require any help I can do the wotk for you.

Thanks but it looks like Kicad has plenty of documentation and is very easy to use so I will learn how to use it and do the board from scratch for the third time.

I see in Kicad they call it PCBNEW as in they probably looked at PCB to pull that in to their system as a building block but decided against it. PCB is 20th century thinking I think and doesn't fit with modern GUI type environments. It is probably ace for experts with its buffer method but out of time now.

Good thing there are no guns in this country because I would have shot myself. I did the schematic then went to read the documentation to see how to attach footprints then realised the documents were not describing my Kicad. It was the perfect start to a bad day. I thought this computer was running Tumbleweed but it was Suse 15.1 so I installed Kicad V4 not V5.

I went to my Tumbleweed computer that hadn't been switched on for a couple of weeks so it wanted to do over 2000 updates and went toast about 75% of the way through. So I downloaded the latest Tumbleweed and 2 hours later tried to reinstall Tumbleweed but the DVD kept claiming checksum errors even though it checked out OK. Fed up with that I went back to Suse 15.1 and tried to
upgrade 15.1 that which as you can guess stuffed this computer as well.

I reckon the earthquake had something to do with it since there is no logical answer.
Today I put the DVD in the Suse 15.1 computer and it completely recovered everything with Tumbleweed installed hence I can give this account of the fiasco. I uninstalled Kicad V4 and installed V5 that all went smoothly.

The other computer still spits the DVD out even when I tried the original external DVD drive that created it. I don't know what went on but at least I have Kicad V5 now and it even opened the schematic I created although did jump through a few hoops to load it so I didn't have to draw it for a third time.

At least I won't have to change this computer operating system again, which is my pet hate, now it is running Tumbleweed.

Gone for a beer.

I did a schemstic fro QL keyboard, in Eagle, which now converted to KiCad 5. I used Cherry switches, just needed to layout the PCB.

I like your idea of the SMD Switch, can you give the details of the switch and I will amend my design to suit and supply a copy of the design files

Would be great, I like the "Click" of the Cherry switches. The Schön PC Keyboard (the big one) was also of this kind, unfortunately, the coating of the switches was a bit lost during the years.

Hi Derek
I am not ignoring you I just haven't had a working computer.

I installed Tumbleweed because it said it had Kcad 5 and everything went to pot on two computers.

It turns out I could have upgraded to Suse 15.2. Everything is still not sorted out but I can at least type messages.

Derek_Stewart wrote:I did a schemstic fro QL keyboard, in Eagle, which now converted to KiCad 5. I used Cherry switches, just needed to layout the PCB.
I like your idea of the SMD Switch, can you give the details of the switch and I will amend my design to suit and supply a copy of the design files

I bought the switches from here
https://www.ebay.co.uk/itm/12x12mm-Tact ... 2749.l2649
and I did get a datasheet for what I thought was the switch but it isn't on this computer so I will post it tomorrow if I didn't toast it in the upgrades like I did with some other stuff.
The whole point of me doing a noddy PCB was so I could learn how to work Kicad whicih I can't do if you do the PCB.

I did the footprint for the switch in PCB under EDA but I don't have that installed so can't open the attached file to check if it is the final one. I arranged the footprint so it could take 12mm and 6mm switches as well as click or squidgy for flexibility and because I wasn't sure if the QL membrane was man enough to push the click one or stay capable of doing it. I call this a noddy keyboard because it was never intended to be a daily used unit since I know these click switches don't last that long and don't compare to Cherry ones. however I envisaged the squidgy ones would last and might be a better unit at a similar price. I the squidgy switches worked like a membrane then the PCB would be a viable membrane replacement with practically no cutting of the QL box I thought but there is is still the electronics engineer doing the mechanical engineering element.

The standard joke being "don't let the electronics bloke pick the box it will be either was too big or small".
Are you sure you have all the holes and the keys in the right place on your board?

I struggled a little with gEDA, mainly due thd tutorials being out of date. I liked PCB-RND, rather PCB.

Imainly use KiCad, which installs quite easily and is a more obvious way of doing the CAD work flow. But that said, I can see rgd gEDA workflow is nearly the same, except all the applications are separate and is more suited to the Linux command line to issue to edit the schematic, generate netlist, create PCBs, generate Gerber files.

The KiCad Gerber viewer, gerbv allows importing of Gerber files and can generate a pcb project file that PCB-NEW can load. This defines the PCB track structure, but does not have Netlist, so there are no associated parts, to link to schematic.

This sort of reverse engineeri g of PCB project, is outlined in Altium Designer, which I have copy running on a Windows PC, but I hardly use Windows, as Linux does most things for me.

I will look at the keyboard switch footprint, I was going replace the membrane with switches on a PCB attached to the bottom of the keyboard case, so as with your idea, no cutting of the case, as with the Schon keyboard.