Well, I've acquired an old CST Thor 1 (aka Thor PC and Thor 8). It appeared to have been quite well looked after, but inevitably time had taken its toll on the poor thing.

The first thing I did with the machine, was to remove the RTC NiCad battery, which had started to leak. However, the leakage was not too bad, and cleared up quite nicely with some white vinegar and IPA. Thankfully, no PCB track damage appeared to have occurred. With the battery out of the way, I tested the (somewhat alarmingly arranged) PSU, and I found that this seemed to be fine, with the correct output voltages being found on the output side, as measured by my multimeter.

So, I powered up the machine, and was met with a uniform white screen. Hmmm. So, after some reading, I swapped out the JS ROMs on the QL for a Tetroid ROM switcher, set to the Minerva ROM. This resulted in the machine booting up, though reporting only 64k of RAM! The Thor external keyboard interface worked, as did both floppy disc drives (though they needed a bit of lubrication). At boot, the Thor copyright message appeared (after the Minerva splash screen), followed by the machine's serial number, which I noticed was written on the back of the case, and on one of the two Thor EPROMs.

To investigate further, I disconnected the QL PCB from the Thor, and back powered the QL from the Thor-QL connector. Resetting the QL with the Minerva ROM eventually produced some RAM errors on boot. Using the NightFallCrew Minerva Faulty RAM decoder (https://www.nightfallcrew.com/minervaram/index.php), it appeared that RAM IC 16 was the problem. Replacing IC16 did subsequently result in the QL booting with 128K RAM. However, random RAM errors were subsequently reported in RAM ICs 1 and 7, and the machine often didn't complete the boot process. I suspected that there could be a problem with the ZX8301, so I swapped this out for a known good ZX8301. This change seemed to fix the QL, which has since been behaving normally.

I had high hopes when I reconnected the repaired QL to the Thor board. The machine did boot. It reported 128K RAM. No sign of the 512K RAM on the Thor, alas. And, whilst the Thor copyright message appeared on cue, the machine serial number no longer appeared on the screen, but instead some randomly coloured horizontal lines. The machine did not respond to the external keyboard, and would not progress to drop into Super-BASIC when left. I rechecked the QL on its own, and it seemed to be fine. Indeed, I was able to leave the QL connected to the Thor board, and have it boot successfully, if I removed the Thor EPROM board, though in doing this I lost access to the external keyboard and other Thor peripherals. Connecting a Sinclair QL keyboard directly to the QL allowed me to test the QL in-situ, and all seemed well.

I therefore turned my attention to the two Thor EPROMs: 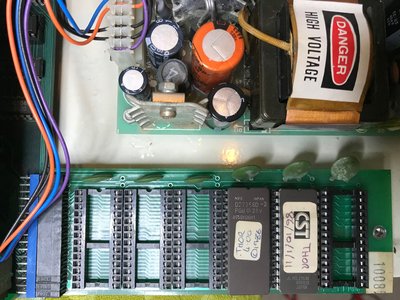 Placing the 27256 Thor 4.00 EPROM (the chip on the left, closest to the main PCB connector) in my TL866CS programmer, I was able to read the EPROM contents without any difficulty, and the data appear to be ok. However, the M5L2764K labelled CST Thor 86/10/1/11 (the computer's serial number) is another matter. This device is not in the supported device list for the TL866CS, but the M5L2764K datasheet states that this chip is interchangeable with the Intel 2764, which is supported. However, when I try to read the M5L2764K using the TL866CS, I find that the device is almost entirely empty (just a long series of FFs), other than for a few bytes right at the end. My conclusion is that the M5L2764K has become corrupted, and that the faulty contents of this EPROM are preventing the Thor from booting, though I suppose that there could be some incompatibility in correctly reading from this EPROM using a TL866CS.

Now, I'm not clear what, aside from the machine serial number, was stored in this M5L2764K CST Thor 86/10/1/11 EPROM - and the Thor Technical Manual doesn't shed much light on this. Looking at the Thor ROMs on Dilwyn's site, it seems that the contents of the 27256 are available there, but not the contents of the M5L2764K.

That's as far as I've been able to get with this machine, so far. If anyone on the forum also has a CST Thor 1, and can give me some clues as to how to get further, then I'd be very grateful for any advice!

I used to have a some Thor 1 expansion boards, but they suffered from battery leakage. I gave to another forum user, in the hope he could get his Thor working.

I only have the disk drives, case with no PSU, Thor Eprom expansion board.

I will see if the Eproms on the Expansion board are readable.

The Thor range use the Argos operating system, which a faster QDOS. Simon Goodwin has some information on his web site: http://simon.mooli.org.uk/QL/ThorOS.html

I think that Minerva will not have the Thor extensions to use the added hardware on the Thor expansion board.

Many thanks for getting back to me on this Derek! And thanks for that interesting link.

I’m really hoping that I’ll be able to get this Thor running - I think that my Thor 1 expansion board is mostly functional, based on my experience so far - if only I’d dumped the Thor EPROMs straight away.... I was naively thinking that the main issues were with the QL board...

I’ve got a GQ-4X4 programmer arriving today, which can definitely handle M5L2764K devices, so I’ll try reading the serial number EPROM again, but my suspicion is that this EPROM is corrupt.

Fingers crossed that you’ve got a working equivalent Thor EPROM!

I have a Thor 16 that I believe has a similar serial number EPROM. I'll pull it down and see what it says. I bet they used the same format. It might help you reconstruct what you need.

Dave - thank you for that kind offer! Much appreciated!

Meanwhile, I've tried the Thor 1 serial M5L2764K EPROM in the GQ-4X4 programmer - the 8k of data read from the chip are identical to the data when I read the chip using the Minipro TL866CS. The EPROM appears to be largely empty, though there are some unintelligible data right at the end of the file read from the chip - I can't believe that these are the correct contents of the EPROM, but I've uploaded the data file below, just in case these data make sense to someone...

The 32k NEC D27256 EPROM contains data that are very similar to the data in the Thor 8 ROMs on Dilwyn's site, though the ROM version in my machine is version 4.00, rather than the slight later versions in the archive.

Just for interest - here’s what the screen currently looks like at boot on the Thor 1, with a Minera ROM: 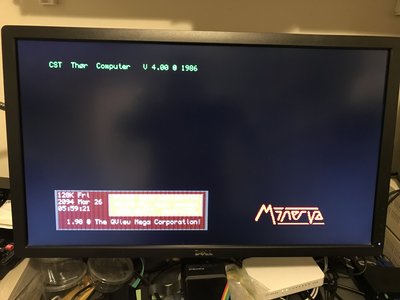 Previously, the machine’s serial number appeared a couple of lines below the copyright message, but this now no longer occurs. The machine is unresponsive to keyboard input, and fails to drop into SuperBASIC. The horizontal coloured lines that I mentioned in the first post are no longer appearing. Switching over to the JS ROM doesn’t alter the machine’s behaviour.

I checked the Thor 1 eprom expansion board, it had tge Thor v4.22 rom and another eprom with a faded label with a date written.

The eprom with the date label, was a NEC 27128D. Reading the eprom with samd eprom programmer as you. Gave all FF in all locations.

Could be corupted, CST did employ copy protection on their interfaces.

Since I do not have Thor 1 board, I can do much more.

Maybe I could put a QL board and Super Gold Card into the Thor case.

Could the eprom expasion board be added to the QL Rom port. With the appropriate connector conversion?

$FF's is the blank state of an EPROM. All that has happened is that the EPROM has self-erased over time. The faded label is a clue to what happened.

You might need to get a known new EPROM image from elsewhere, and you might need to change the serial number if they used ACTUAL encryption - though they may have just used address and data bus re-ordering to achieve a level of complexity that in the late 80s was equal to encryption.

There are many Thor ROM images here: http://www.dilwyn.me.uk/qlrom/

Interestingly, it seems Urs König is knowledgeable, and I believe he is a member here. Maybe you might message him?

From the CST technical manual:

4.02 THOR ROMs from issue 4.00 onwards contain both a checksum verification routine, which should guarantee the integrity of the code therein; and a serial number/watermark identifying the machine as a THOR. This can only be checked by using a new trap-call in the extensions to the operating system. No attempt should be made to verify this by direct access to the ROMs as any access to this area will cause a hardware lock-up of the machine to occur.

4.03 goes on to describe the start-up procedure. It states enabling the keyboard happens after this check, and loading the hardware configuration routines, which are apparently delicate.