So, Dave, next week-end is the release of issue 8 ?

What's going on is that I have been multitasking. I have done five manual layouts of the Issue 8 and found problems with each - evolving the design to this current 6th iteration. A couple of things I thought were "really good ideas" turned out to be of dubious practicality - don't get me wrong, they brought something to the table, but there was a definite cost. I ended up looking at it dispassionately as if the board were laid out by someone else. It then became clear that unless you get a compelling advantage, there is no need to make the compromise.

While doing this I have also been working on the serial card, which needs to be sent to Europe in the next two weeks.

Yet, I am making progress.

Dave wrote:There's also a couple of non-QL-related projects. A 6502 "memory saver" that will plug into any PET 2001 - 8032 with bad or missing memory and give it 32K of working RAM, a LumaFix128 that fixes some problems with e5frog's version - it's breaking a lot of C128s, and a 512K S-100 bus card I have been given a little money to produce from a schematic.

I watched short YouTube video of someone trying fix a PET 2001.

Which the analogy of the Car Bonnet (Hood for USAer), was used for lifting of the PET case to access the motherboard. I did wonder if he was gonna change the oil as well, is the PET stream driven...

I look forward to seeing the Issue 8 board.

Dave wrote:I'm a little behind...

What's going on is that I have been multitasking.

While multitasking is good for the QL operating system, it makes most (male) humans terribly inefficient. Many good QL projects died or were delayed for years because of multitasking.
Wish I could send an "interrupt disable"

Peter wrote:Wish I could send an "interrupt disable"

Peter wrote:While multitasking is good for the QL operating system, it makes most (male) humans terribly inefficient. Many good QL projects died or were delayed for years because of multitasking.

This is my experience too. It takes me about 10-15 minutes to effectively switch tasks. My conflict is that after 5-6 hours of doing the same thing my concentration starts to fade. So I do 'other items' in 2 hour blocks with 30 minute breaks between them, and the Issue 8 in 4 hour blocks with an hour break. This maximizes efficiency.

I can do 8 hours of work on one thing, but then I see stars - and I do need that 1 hour break in the middle.

Today I am trying to resolve a structural issue that I have with Issue 8:

Nasta decided that the video system should be replaceable/upgradeable, which means putting it on a small "video card". I leaned more towards leaving it tightly integrated, so if a video upgrade for original QLs comes along, it will also work on Issue 8 without changes. We ended up with a hybrid system where the two huge dual port SRAMs are on the QL mainboard, with the A ports connected to the CPU bus, and the B ports connected to headers. This is quite neat, but I found it also problematic because I have a really hard time placing and routing around a connector between the two DPRAMs. There is some VERY tight PCB trace work in there, and putting a connector there makes it *hard* and placing it somewhere else doesn't make sense to me. Also, if the DPRAM is on the main board, you're committed to it forever.

My proposal is to move the DPRAM onto the daughter card, so ALL the video elements are replaceable. This would allow the system to benefit from a Nasta-made upgrade, or a generic "All QL" upgrade in the 8301 socket. This also means the memory associated with the video system could be changed too, without having to change the mainboard.

This really implements a full internal expansion header across 80 pins or 120 pins (you'll see why this is important later) on two or three 2x20 2mm headers. You could put video, memory, a CPU upgrade, anything there that could go on the extension bus.

I think this is more interesting, because doing this frees up enough room on the board to have two of these extension ports. So one could be the basic video system, the other a 16M expansion, or a CPU and memory expansion, or... or...

It also leaves plenty of room for a small IDE interface to be placed onboard, with a CF slot under one of the boards.

My dilemma is, this gets well away from the original spec of a simply reworked Issue 7 QL fixing the obvious things... Once you know you're placing the video system on a daughter card, you either have to not do it, or do it properly and completely.

Let's circle around to the two or three connectors for each daughter card. IF we made sure enough pins were available, we could have D0-31 and A0-31 on there as a private bus between the two cards. This would allow a -for example- 68030 upgrade to talk to a video card in 16 or 32-bit bus widths, the QL subsystem in 8-bits, and everything is idealistic and wonderful.

The trap in all of this is that you either don't do anything and keep it really straightforward, or you split off the video subsystem, and once you do that you can get a lot of miles from a little extra investment, so where do you stop?

And we all knew from the start that feature creep was the enemy of getting things done.

In a bit of "show and tell" here's the layout I'm trying, just experimentally: 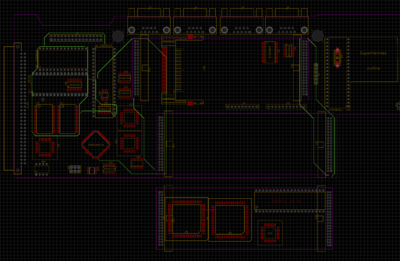 On the left you have a ROM socket, a dual ROM/Flash socket, 512K SRAM and the CPU. The 8302 sits alongside them, tightly integrated (it really only has a slow serial link to the 8049 so that can be a long run) and glue logic where it fits best.

The keyboard membrane FFC connectors are central, and above and below them, two card areas (outlined in purple, with 2x20 headers each end - ignore the sideways header yellow graphic - that was just the first part I found at 4am!). Below the board, I demonstrate that this is the smallest daughtercard that can take the currently selected components.

There's maybe a 5% chance it'll end up going this way. The main thing is it leaves a lot of rear board edge free.

I also rough laid out a mini-ITX version that came together something like this: 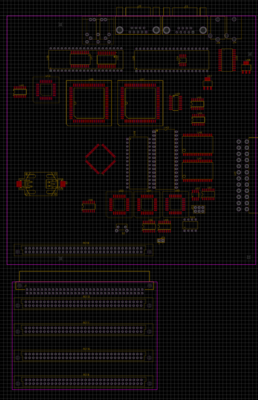 My biggest bugbear is lack of a nice, high density, mechanically strong connector that is SMD. I'm open to recommendations. Mostly, the male and female sides, combined, need to cost less than $3-4, support multiple insertions and have at least 96 pins.

Nasta just sent me a photo of the QL video card prototype: 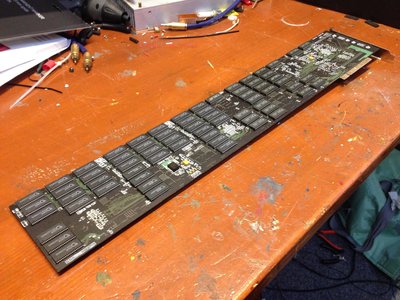 Dave wrote:Nasta just sent me a photo of the QL video card prototype:
I kid! I kid!

. Its smaller than I think. Seems Nasta has worked at Quest

Dave, what's your next deadline for issue 8 ?

Users browsing this forum: No registered users and 18 guests