just another thought - how are you connecting the monitor to the QL - is it via RGB lead ? If so, try unplugging the MC1377P chip, it is not needed for RGB output, and it does have a connection to SYNC (VSYNC) which is fed to the ZX8302 chip to control frame interrupt -which is in effect the heartbeat of the QL and which allows multitasking. if this pin is loaded by the chip or by the monitor, it may affect the QL's behavior - the pin is directly connected from the 8 pin RGB socket to the ZX8301 and ZX8302 - there is no resistor or protection for it.

Pr0f wrote:check this pin on the ZX8302 chip to 5v and GND and see if there is any short circuit there. This is Pin 2 on the chip. There is a resistor between this pin and 5V line - value is 3.3K, so there should be some resistance when measuring to 5V.

Updates about repair status.
- Cheched resistance value between pin2 and 5V: I got 3.3K as expected. Almost same value when checking pin2 and GND.
- All edge connector pins (as told before) look perfectly aligned, included EXTINTL.
- Removing MC1377P does not produce any effect.
- Found some "strange" solderings in the resistors near the ROM expansion port. For what I know, they might be perfecly normal, but I'm not sure so I attach a picture: 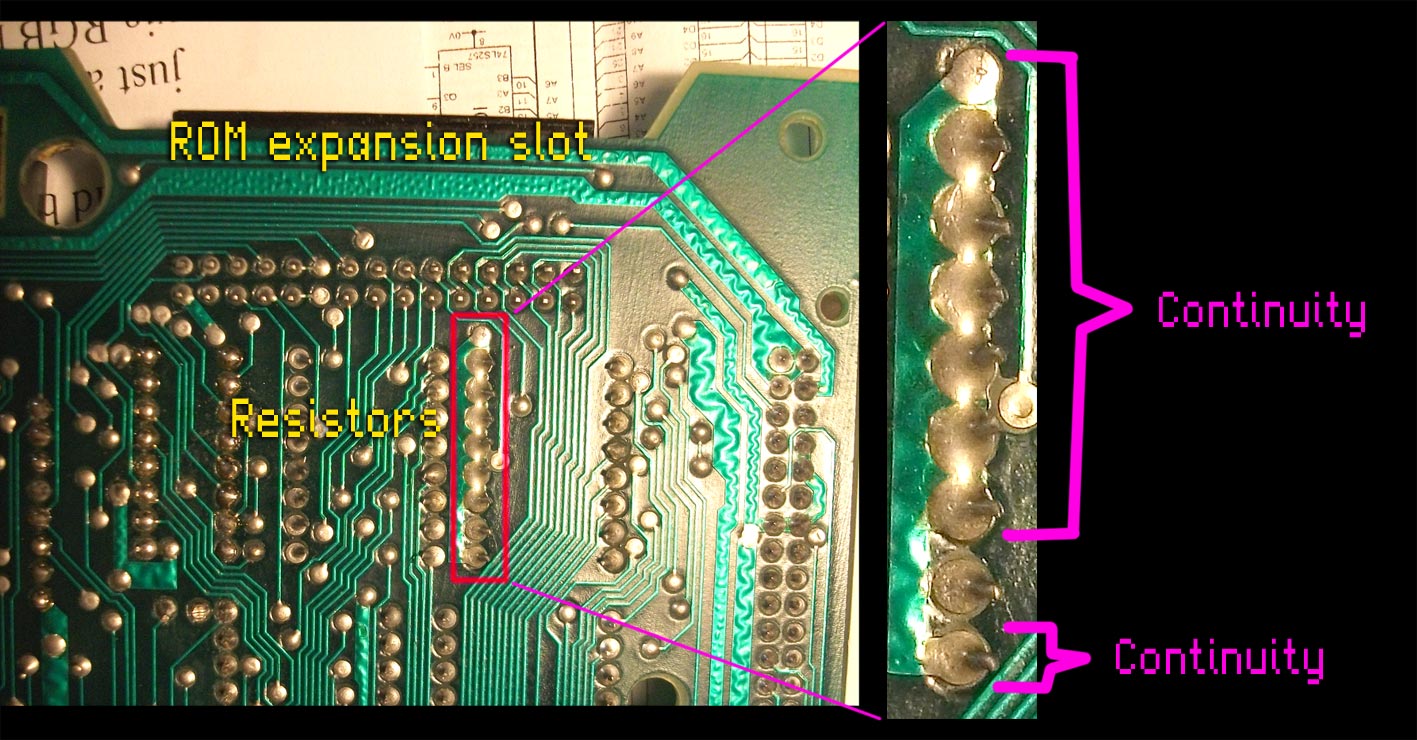 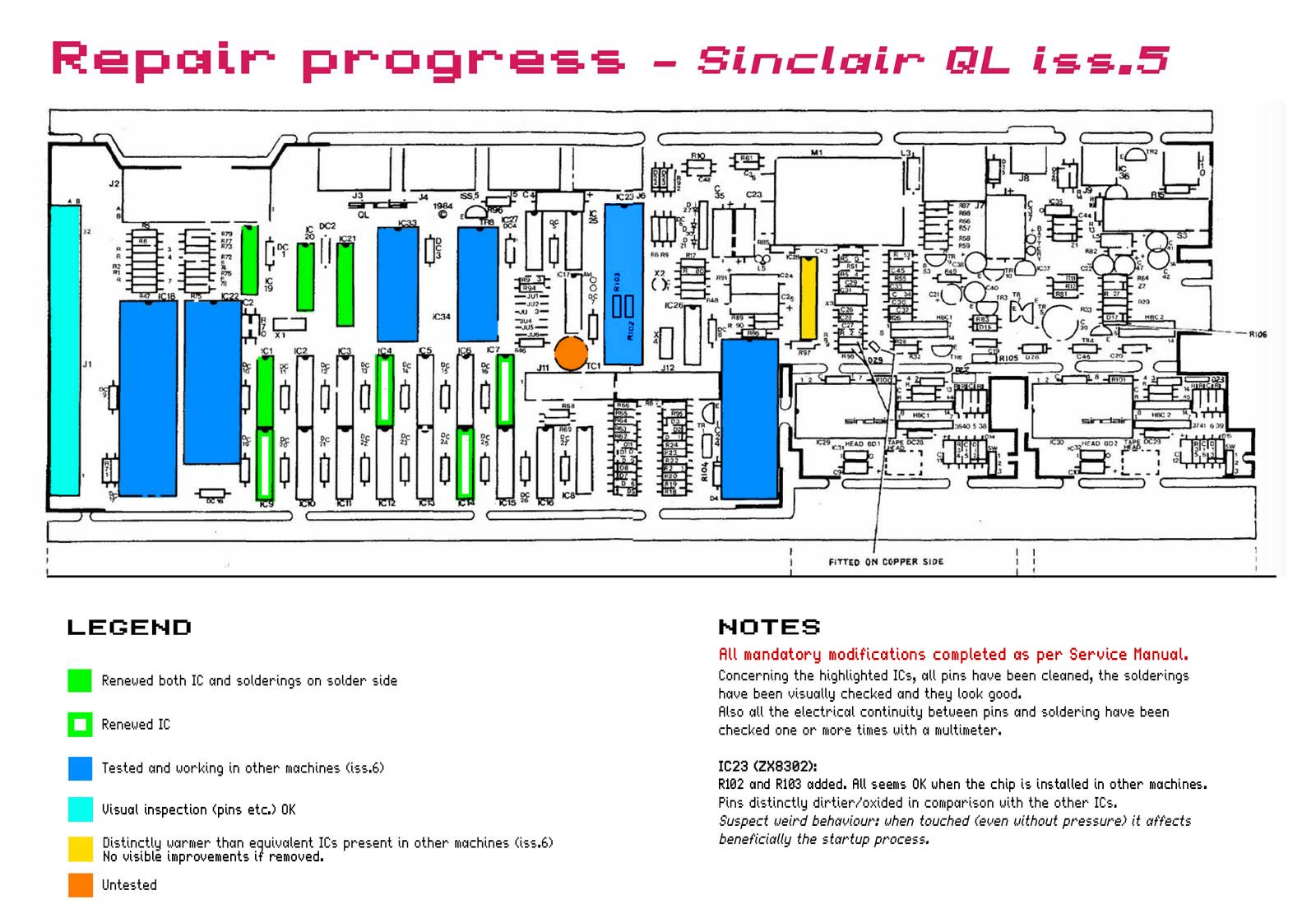 I have been following this thread for a while as I to have a QL which will not boot and gives a garbled screen, at first I replaced the decoder logic chips (74LS257's and LS245) and it made little difference. So, as you do sometimes, you put the computer away and start another project. Well after a while it was this machines time again and reading about similar issues it was suggested to replace the ULA 8301 as this was know to cause this type of problem. So I tried it and it made no difference again.

Weeks passed before I could get hold of a new (old stock) 8302, but still no go, I could see there was an issue with the data lines as the output was low on some of the address lines, but could not track it down. So in for a penny, in for a pound, I de-soldered all the main logic and memory chips, including the video decoder.

I have a Commodore 64 that I tested the memory chip with and yes one was faulty, 'found it' I thought.., but no.

So I ordered more memory and a new MC1377 and a new CPU (10MHz). Did it work, of course not, So I tried the Minerva ROM with the better memory checking routines. 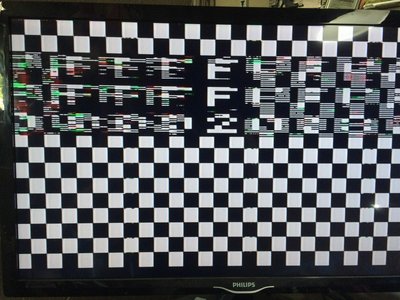 What can it be, a fault on the motherboard itself, I hope not I have spent weeks of my life on this machine, I will get it go if it kills me....

Deep breath, Think... you know it's a memory address problem, start again from scratch... So I went back to the address decoders and it WORKS NOW !!

It was one of the 74LS257's that I replaced many months ago. 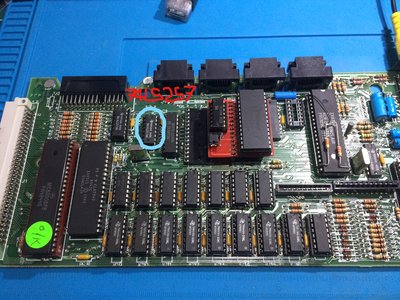 I have a Mini Pro programmer that tests TTL and Cmos IC's and it has not let me down before, but it passes the LS257, but it will not work in the QL.

So I have modded the modulator and I still have one chip that gets quite hot, but still works fine, the RS232 line driver chip. Still not a real problem. 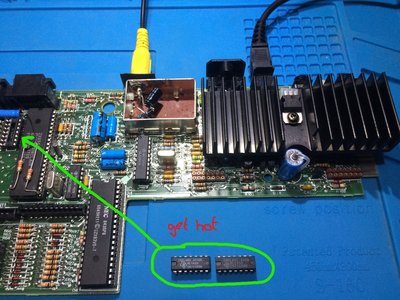 The moral of the story is, never give up! But if in doubt, start again...

I hope this gives you some words of encouragement.

So long and thanks for all the fish !!
Top

The moral to this tale is, If at first you don't succeed, don't take up skydiving!

Seriously, well done for sticking with it.

And welcome to the forum.

Technical-Chap wrote:Deep breath, Think... you know it's a memory address problem, start again from scratch... So I went back to the address decoders and it WORKS NOW !!
It was one of the 74LS257's that I replaced many months ago.

It looks like you said it is the 74LS257 but they are not the chips in the picture are they? Then some mention of line drivers and you say you modified the modulator but what has that to do with the problem? I have a similar problem as on this thread so it looks like there might be a circuit weakness or maybe a fundamental design timing problem that sticks multiple outputs on the bus for a fraction of a second causing different things to go toast on different boards.

Ruptor wrote:... and you say you modified the modulator but what has that to do with the problem?

They way I read his post is that the modulator mod was an additional change not one related to the initial memory issue.

Speaking of the modulator mod, it looks like almost everything was taken out of there and now I'm guessing the QL gives you composite from that RCA connector? I grabbed composite off of pin 7 from the MC1377 IC and routed it to pin 3 on my DIN socket with a resistor and a switch mounted on the modulator case with hot glue giving me color and bw composite on the same DIN cable with a flip of the switch. The b&w composite signal is so crisp I haven't gone back to the color composite in some time and I had even bought one of those SCART to HDMI converters but it came dead-on-arrival and haven't bothered since as my current project only needs b&w.
Last edited by bwinkel67 on Wed May 13, 2020 10:36 pm, edited 1 time in total.

Technical-Chap wrote:So I ordered more memory and a new MC1377 and a new CPU (10MHz). Did it work, of course not, So I tried the Minerva ROM with the better memory checking routines.

BTW, this caught my eye. I'm guessing the new CPU's 10MHz speed was just a by-product of finding a replacement as the QL's is 7.5MHz. Back in the day I opened my rather expensive Mac IIsi and replaced the clock crystal to speed it up. Never heard of anything like that on the QL. If I recall the crazy 90's, there was also ways to speed up computers by messing with the power supply itself.

bwinkel67 wrote:If I recall the crazy 90's, there was also ways to speed up computers by messing with the power supply itself.

Yes that is one way they make the chips faster by reducing the supply voltage but then running at 1 to 2 V they become very sensitive to noise.

On the QL you could run it at 4.75V that is the minimum specified for LSTTL that would give a 10% reduction in heat which is why they drop the voltage on chips. If the QL still worked at 4.5V you could maybe run the CPU at 10 MHz.
I see some people have removed and socketed all the RAM chips but wouldn't it be better to fit a static RAM chip for 128 K instead if all the RAM is out anyway or is that not possible?

I realize with inexpensive upgrade options like the GoldCard this is a bit moot, but has anyone tried this? A group of us just did a bunch of timing tests and it may be that JSU ROM is about 5% faster than JR ROM (the only difference is that one had Hermes and the other had vMap -- the latter could have an impact I suppose)

Yes as already said the last two comments were extra to the RAM issue. As I do on all old British computers from the eighty's and early ninety's I put a simple PNP amp circuit, this gives a colour composite output on most machines, some need a bit more work or the signal inverting. 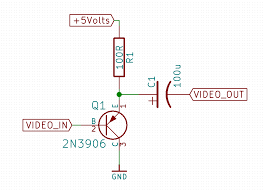 I am not to worried about the hot 75188 line driver, I don't use the serial port for much, as you can see below, I use one port for the ROM selection and ToolKit on/off, I leave port one available - just in case.

This is my issue 5 board, but both machines are now the same. The real time clock mod does not include the new reset mod, but it works most of the time.. (get it!).

As for cheep memory, the clone of the QubIDE PCB is easy to get from eBay with just PAL 3 and CMOS 512KB chip, 640K is not hard to get to. 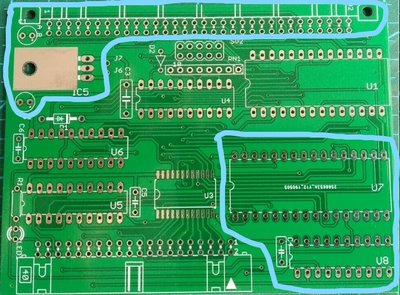 Just to clarify, I have only looked at the schematic and will test this today and give an update, but can't see why it would not work. But if you are going to do this much you might as well build the whole board and have IDE to.

So long and thanks for all the fish !!
Top
Post Reply
96 posts