FP, that's a new one to me. The Greek ROM is called ΣFP, so there must be a connection there.... I wonder if the Greek version uses the chip labelled FP for the first part (left chip) and then 'ΣFP' for the above $8000 containing the language stuff, just like the general MG and local specific MGx in combination.

Derek_Stewart wrote:Can you do a tom image of the other rom chip?

MGB is shared above by Charlie, Derek. It should be the same data as on the chips in the pictures.

Collector of QL related computers, accessories and software even though I don't really understand how they work!
Original QL's: many (plus quite a bit of other old stuff and 170+ original software titles)
Custom XT cased QL system with Gold Card, Qimi mouse, Hermes and MFM HDD
QXLII card installed in a PC
Q40 and Q68 also present

Ask me about near NOS re-felted good quality Microdrive Carts - many available.
Top

I guess Beckman has the copyright but the allowed the Spectrum 48K ROM to be freely distributed.

Lack of time has hindered me from make a copy of the ROM.

And also a picture of the keyboard since this has real keys and not stickers. 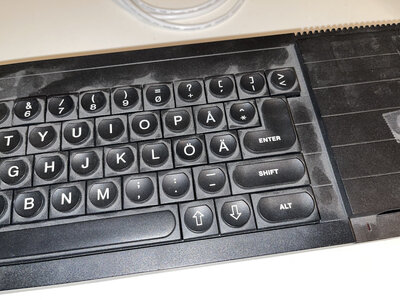 dilwyn wrote:Thanks guys. I've zipped up the three Swedish ROM versions and preserved them on my site...l[/url]

I have managed to get the correct rom image (attached). The QDOS version is 1Y13 and the ID returned by PRINT VER$ is 'MGB'

Thanks Charlie, so we now have the four Swedish ROM versions for the QL!

Last night, I was contacted by Pär Högberg who saw my posting about the Swedish ROMs on the QL group on Facebook. He said he also had a QL with MGB ROM and kindly sent me a photo of a different MGB setup:

This also seems to use the original Sinclair MG ROM for the first 32K (just to the left of the carrier board), with a 27128 EPROM on the carrier board for the other 16K, with some changes to the code in the top 2 or 3 KB of that upper 16K, mainly changes to the message languages and keyboard table for the Swedish keyboard layout I think (after only a quick glance). The ROM version in his QL is also MGB/1Y13. Presumably the Swedish importer of the QLs just made their own temporary ROMs to adapt existing QLs for the Swedish market.

I gave Pär a link to the Forum, so he may join us in the coming days.