Discussion and advice about emulating the QL on other machines.
Post Reply
37 posts

janbredenbeek wrote:When you start up QPC2, there is a dialog box with a setting 'Power Management'. When I set this to 'off', QPC2 almost constantly uses 100% of one CPU core. When set to 'on', I noticed no significant increase in CPU utilisation when idle. There's also a setting 'suspend'; I don't know off-hand what this means. Marcel?

Thanks Jan. Im aware of that, and my setting is always on On. IIRC, Suspend means QPC2 is suspended when not in focus.

Dave wrote:My suspicion, as a user of the same package, is that you have changed the emulated machine's speed from a slower clock to a much higher speed. This is the main factor deciding CPU load.

Dave here seems to refer to something else

Some confusion in posting the above. It may appear twice. Sorry

I ran an older version of QPC2 (V3.xx with SMSQ/E 3.13) under Windows 2000 in a Virtual Box
on the same Macbook. It behaves about the same! So perhaps its just my machine that needs
a proper blow-through. I was saving opening the machine until I could combine it with replacing
the battery. Oh well.

Ill report back on the results, when I get round to it, so we can put the issue to bed.

Thanks for your input Dave, Derek, Jan

simon629 wrote:Is it a Basic setup or is it using QDT or LaunchPad

Its hardly basic, but no, I dont use any other GUI than the inbuilt one, "QRAM". There a a few background programs running, such as CueDark, a clock and a number of buttons, but nothing that consumes more than a trickle of virtual CPU cycles. Also, nothing essential has changed in my setup (unless Im forgetting something!) that would explain the increased amount of apparent strain my computer seems to be suffering.

I had forgotten about QRAM.

It is not part of QPAC1 package.

Do you know what the status of QRAM is. Is it still copyright.

I had forgotten about QRAM.

It is not part of QPAC1 package.

Do you know what the status of QRAM is. Is it still copyright.

I put "QRAM" in quotes. QRAM was the precursor to the current Pointer Environment. It was QRAM that got me hooked on GUIs. Everything before that was just mickymouse, to my mind. Like Norm, I was a purist

(Ok, the original Apple Mac was cool, but getting behind the mask was a real pig and it cost a fist full of $$ just to try.)

So, back to your question: I dont know the status of the QRAM suit. I vaguely recall that at over time bits and bobs became increasingly incompatible with PI/Wman and SMSQ/E, and eventually stopped working. Everything that was salvageable ended up in the latest version of QPAC1. Of course, the original QRAM should still run on a BBQL.

Update: I just checked it out (latest QPC2/SMSQ): It seems to work again/still - ! At least somewhat. Doesnt do real directories, and I havent dared to use it, but there it is: 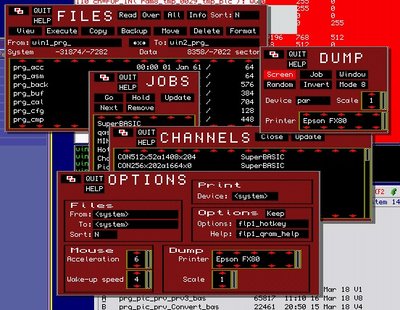 Have you enabled "Show kernel times" in task manager? How much of the CPU bar turns red if you do that?

mk79 wrote:Have you enabled "Show kernel times" in task manager? How much of the CPU bar turns red if you do that?

Im not sure what you mean. This is W7.

But, is this any good?

[In Preview mode this image shows up twice

I have no idea why. It may not do so in the final posting...]
This shows the last 50 secs of my activity in QPC2, fullscreen, Power Management = On. I moved a Files window around, after that it was just idling.
In Window Mode, things are slightly less hectic, as the next image shows. The bar top left in the QL part of the image, shows the level of my activity inside the emulator over the previous 60 secs. It almost looks as if idling costs more than actual activity!.. 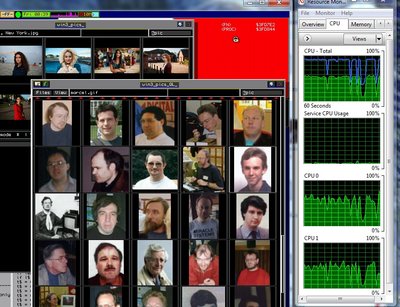 No idea why the first image showed up twice. It was only stated once in the text. Tried to get rid of it, including by re-writing the post and re-uploading the images. No way! Sorry about that.