by stephen_usher
There's a lot been said about how the QL when it was released was obviously not a business computer but few have looked at what the competition was in the UK at the time.

So, here we have the British business micro which would have been closest in capability to the QL, though very much more expensive. 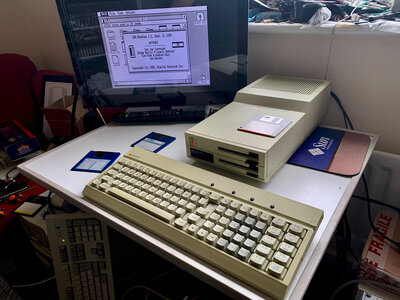 The original F1 was announced and released in 1984 and was based upon a 4MHz 8086 and in the UK came with 256KB of RAM and a single built in 720K 3.5" floppy. Although it ran MSDOS it wasn't IBM PC compatible. The price was around four times the price of the QL, which would have been quite an investment for any business.

The 8086 is a full 16 bit processor, unlike the ICM PC/XT's 8088, so even though it's running at the same 4MHz the memory access is double the speed as it's not multiplexed.

The machine pictured is the second version, the F2, which has 512KB of RAM and twin floppies and arrived in 1985.

So, if we put the QL into perspective, for a small business it could well have been a reasonable option, if the press hadn't slammed the Microdrives.

If Sinclair had built the machine at double the price and added a single 3.5" floppy things could also have been different... but that's all history.

I used an Apricot F1 ata Technical College in 1985, with a CAD programme on a HNC in Mechanical Engineering cource I did at that time.

It ran MSDOS, I can not remember the CAD programme name, but the course leader, seemed to like it.

Not quit a QL, but the only advantage for me was the hard drive and floppy disk drives.

I totally agree with the fact if floppy disks were used instead of microdrives, then the QL would of been a different machine. I moved to floppy disk drives with the Miracle Trump Car, which total made the QL a better computer. Also do not forget the builtin networking facilities, which PC compatible computers had to have extra hardware and driver software.

by bwinkel67
I recently saw a pretty nice piece on the early Amiga on youtube:

...it originally didn't fare that much better than the QL and it's first two year numbers were only about 150K units (wasn't the QL, over the span of 2 years, at about 100K?) but it got to a 3rd year before it was pulled (I think selling about twice that many more). The interesting bit was that Commodore was in financial trouble and stopped production on the Amiga, made revenue using the C64 and then relaunched it later on and it became more successful. If Commodore had sold its business to another company at that point and that company saw a cash cow in the C64 but didn't want to invest in the Amiga, it might also have been a one-version machine that lasted 2-3 years. The Amiga had pretty good hardware and of course standard use of floppy drives.

Just pointing out that the biggest problem of the QL wasn't necessarily the microdrives (though they didn't help things) but more the company management (i.e. Clive) that lost interest and sold the company to Amstrad which subsequently dropped it. We never got to see that Amiga 500 equivalent of the QL that made the Amiga line successful for a short time. Note that I'm not saying that technically the two computers compared well, as the Amiga had much better hardware, just making a note that even with that hardware, marketing ($40 million dollars of it), and full support of the company was an equally important element and even with all that, Commodore mismanaged itself out of business eventually.
All times are UTC+01:00
Page 1 of 1
Powered by phpBB® Forum Software © phpBB Limited
https://www.phpbb.com/