It looks really amazing!!
In forum's next zoom meeting you should make a presentation on how to create such great QL art - and programs.

Unfortunately I don't have the time to learn the gameplay right now, but I'm in awe of what you manage to pull off in pure basic. Fantastic!

Another fantastic and professional software! Thank you!

qbits wrote:Hi All,
Another year has nearly passed, eventful yes, but not in the way any of us would have wished. Few visits and the prospects of self-imposed restraints on any family gathering has left this year’s Christmas full of Zoom.

The last few months with the pressure off I haven’t been totally idle, back to my S/SuperBASIC I present a QBITS early don’t miss Black Friday offer to download. ‘QBITS Pandemic’ free of any charge of course or royalty issues. And I can hear you all saying I just knew it, someone was bound to get around to rolling out such a Prog for the QL.

Hi,
I thank you all for your comments. Andrew, the offer to give a presentation/discuss my SuperBASIC powers I will have to decline, I have to keep my real identity a secret! (I’m also very shy). However, I offer a couple of Progs that may be useful and part background to developing QBITS Pandemic. Excuse the Demo just a quick knock up.

Aaaah, you're actually using the additional "mode 4" colours in high colour for great effect. Clever. Didn't notice because I instinctively switched to QL colour mode before trying your program. That the deep blue maps to black in QL colour mode works out pretty well

Hi Qbits,
today I had the time for a quick test of QBPandemic on my BBQL (+ Trumpcard). In the beginning the planisphere rendering is slow, but then the game runs fine and is fully playable

Now, I have to find the time to read carefully the manual in order to fully enjoy this little masterpiece!

Hi All,
Early days yet I know but I have jotted down a few ideas for a QBITS SuperBasic Game for Christmas 2021.

Back in 1987 I was given a coffee break game challenge. An idea germinated and a after a couple more coffee breaks some workable code. A life time of coffee break frustrations followed playing the damn thing before being forgotten, so annoyingly today it is resurrected

A QBITS Noughts & Crosses Coffee Break Challenge:
I have added to the display of the original version the number of Played games, Wins by O or X and the number that Failed (no winner). As a promotion in the use of SuperBASIC the challenge is to write additional code (PROCedures etc.) so the game plays itself in a simulation mode clocking up O or X Wins and Fails. A bit of AI programming, or purely Random who knows! For further fun it did occur to me that the symbols don’t have to be O or X, other forms of the Game uses faces, emoticons perhaps. At the end of the day just have some fun tinkering in SuperBASIC.

Note: No Pressure Challenge concludes in Autumn 2021 (no fixed date as yet I’m open to suggestions) I will review any posting as and when I can. 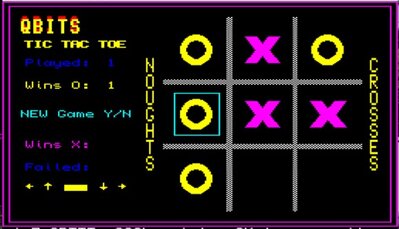 Hi, the management have been making suggestions that I need to get out more and exercise. The same management I might add who attends to the catering. Apparently, I’ve been spending too much time looking at screens. I have read a few books in-between viewed my favourite DVD’s and watched a bit of TV. But before you ask, Yes I have enjoyed the time spent in coding my latest S/SuperBASIC efforts.

Coding for Player interaction with QL S/SuperBASIC has three obvious options and possibly a lot more.

The first is KEYROW(row) ie. for Spacebar: IF KEYROW(2)=64:Action code: Joysticks being the typical use.

The second is INPUT#ch,Str$, which provides limited line editor functions, and maybe used for inputting players names, selecting device names etc. When I use this, I define a con_ channel with set character buffer and a window size limited to the display of my string.

The third is INKEY$ which I use with CODE in the form k=CODE(INKEY$(-1)). Keyboard input is converted into its ASSII number and can then be used with IF or SELect ON statements. The SELect ON being most useful for such as ‘Yes’ with either the upper ‘Y’ or ‘y’ lower case characters ie, k=89,121: Action Code.

Potentially PEEK$ is another ie. PRINT PEEK$(start address, number of bytes), returns a string, that could be actioned. I guess with the pointer environment HOT_KEY’s etc there are a range of others.

Character displays form part of most Game Screens. My latest uses numeric values that need to be Right Justified and in some cases with a decimal point. To deal with this here’s my Procedure Decimal Right Justified (DRJ) with (ch) channel, (cx,cy) pixel coordinates (dp) decimal points and (sp) total character spaces to fill. The one caveat with this code is the number string generated cannot be greater than the character spaces and the num supplied needs to be an integer, the use of INT(num) helps ensure that this is the case.

If you have written anything similar, I would be interested to see them or simply discuss alternatives as part of this topic!

Well with Easter almost upon us, I offer this the latest from my QL Tinkering’s… In continuation of my Coffee Cup Challenges, my QBITS Sliding Tiles and write up which includes QBITS Tic Tac Toe and a New Game QBITS Trader to test your resolve and skill as a Stock Market Trader.

Return to “Help for New Users”

Users browsing this forum: No registered users and 5 guests